Now, that the in- and outside of the house are done in bare bones, it is prepared for new pipes, plumbing and a new electric circuit. This means Katrin and I had to make up our minds as to where the bathrooms (there’s one on each floor) and the kitchen sink(s) will be located. There will be one large kitchen on the lower floor and one bar type thing with a sink on the upper floor. It is practical that the construction gods foresaw ripping up the walls at a stage where those walls are still dirty and full of dust. And this is exactly what happened when Pere and his co-worker came to flex some water canals:

What we see here is the view from the canals of the kitchen sink, the new canals for the waste water, before the camera turns to the new bathroom and finally, the sleeping room.

The first problem that needed solving was the ceiling. Asking around I got hold of Mladen’s number who brought his special concrete saw. After he was the done, the place looked like this:

This perspective of the usptairs room gives a good impression of what the plans for the entrance look like. While now the entrance faces the north (right) side (and directly the street), I want to enlarge the remote window to work as the new entrance, together with the balcony providing the connection to the street. One further positive side effect entailed that I could make use of the space under the porch roof covering the entrance by inserting walls here. This would turn the former outside door into an inside door.

With the destruction of the conrete ceiling one important step was already taken. Now the foucs shifted on the lower floor. The terrace that my father had built increasingly being broken open by grass something had to happen here, too. And the balcony that was to be built on top of this terrace needed to stand on firm and stable ground. This meant there was no alternative to tear down the terrace and build a new one.

With the upper floor and the terrace thoroughly in ruins, the lower floor needed some destruction, too. Rooms like the preliminary bathroom was not only not useable but the (structurally non-relevant) wall needed to be moved, too, so that a new bedroom and a larger bathroom would have enough space in the layout.

After tearing down that wall, the place look like this:

The next steps consist in removing the rest of the wall and close up the stones in the corner with a thick concrete layer so that the new plumbing can be laid.

Reconstructing our old family home in Croatia was in the back of my mind for a long time. Living and working in Berlin, this was difficult if not impossible to accomplish and I knew I would have to be around for things to happen. In spring 2019 my then employer closed down his business and the time was ripe: I relocated to Proložac, near Imotski in Southern Dalmatia.

The house that awaited me was structurally still in great condition but it lacked quality piping, the electrical system needed renewal and the interieur was slowly falling apart.

Before I could start building something I had to tear down a few walls and get to the bare structure.

The stone walls we uncovered had remains of the mortar on them that my father had already partially removed but later decided to cover with drywalls. My plan was to clean the stone blocks and re-grout them. Also, the windows were tiny, as they always are in old stone houses. I wanted to enlarge them to increase the amount of light the upper floor gets. Not least, the upper floor was separated from the attic by a thin concrete ceiling which made both floors quite low spaces. So I decided to have that ceiling removed to end up with an open space. And to retain some of the upstairs space while at the same time preserving the openness of the room a gallery made of wooden beams seemed to be a good idea to achieve this.

The lower floor had been only used in the summer as an expedient kitchen and a bare-bones bath room for those warm evenings on the terrace. Here I had some more modest ideas: covering the walls and ceilings with dry walls and laying tiles in the new bathroom.

Last but not least, I wanted to move the entrance from the north side (facing the street) to the south. With the upper floor street level and the lower floor facing the terrace, I needed a balcony that would not only increase the leisure space but also provide the connection to the street level for the new entrance. 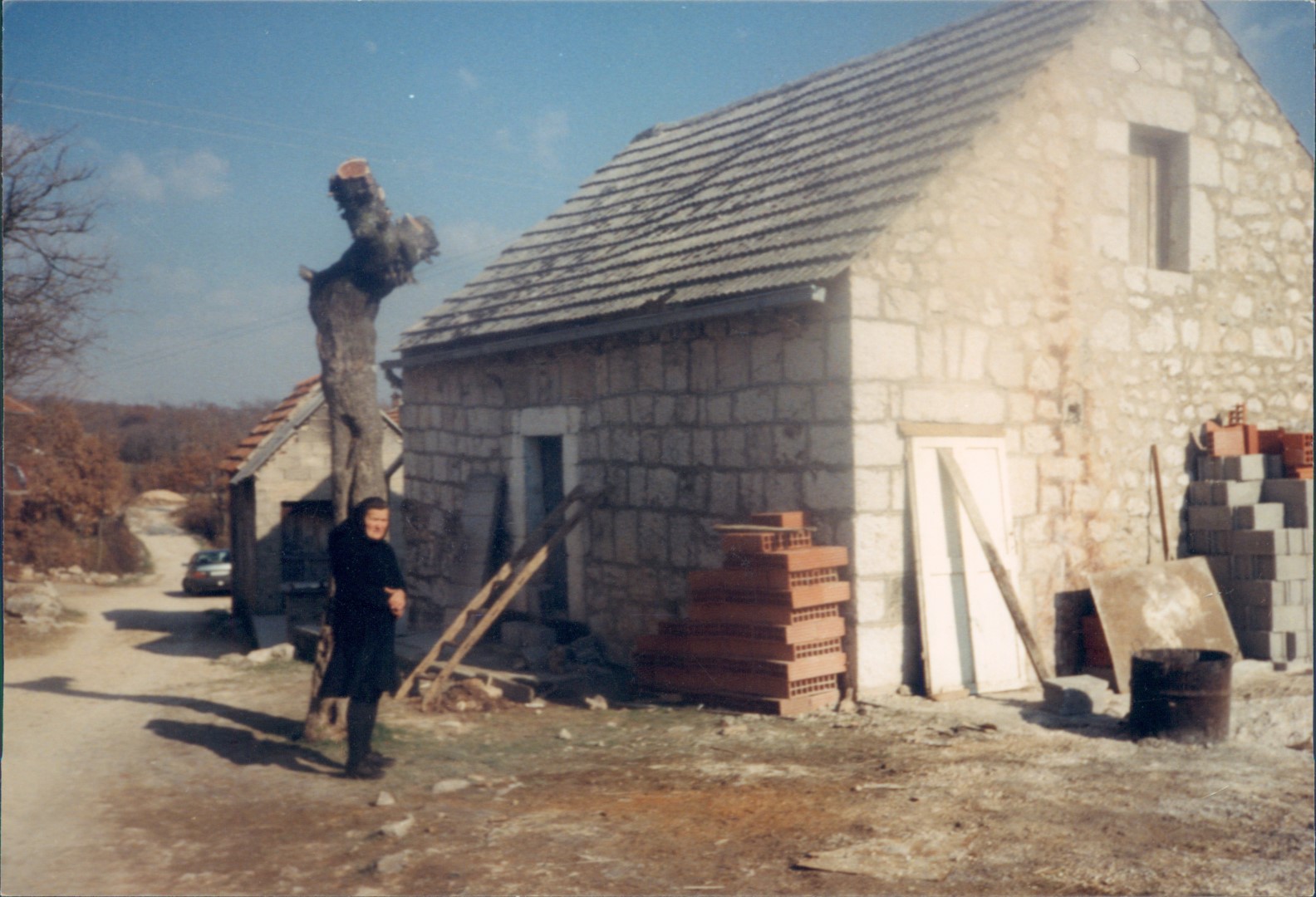 The story starts with the tribe of the Marsici living in and around the area of Prolozac and Imotski. After returning from working in the coal mines of Belgium in the 1930s, grandfather Marsic, a young man in his late 20s, decides to build a house in Prolozac Gornji, a mountain municipality in the Dalmatian hinterland, about 120km from Split and a 10 mins walk from the green (and back then non-existent border) to Bosnia-Hercegovina. To make his life easier they built the house into a hill slope, so one back wall and half of the two short side walls remain stabilized under the ground.

Stones were broken off in a nearby stone pit, hammered out in massive blocks, and individually carried on wooden stretchers, often by women. There the boulders would be hand hammered into tailor-made building blocks, not only turning them into perfect cuboids, but also giving them their characteristic texture on the outside.

Stone houses back then were constructed with basically two vertical stonewalls and a layer of rubble in between acting as insulation. Each of the walls is about 25cm in thickness so the final walls were between 55 and 60cm in diameter. The floors are built with wooden beams connecting the long sides of the rectangular ground area. Due to the little height people back then had in poor and frequently malnourished Southern Croatia, the floor height is only about 180cm – visible by the remains of the wooden beams in the two opposing walls.

The roof was in its first version traditionally built out of a wooden construction and stone tiles, again hand-hammered and carefully placed on the roof framework. The first stage of expansion was finished in 1938. The house was eventually finalized in the early in 1950s.

The house was built, as many houses in Southern Dalmatia, without an internal staircase and two entrances, one on the lower and one on the upper floor. Since its completion the house was used by the father’s side of my family. While the upper floor hosted the sleeping rooms, the ground floor inhabited a shared kitchen/ living room area as well as a small cellar-type room for the storage of smoked ham and vine.

After my father inherited it in the late 1980s, he started some reconstruction work himself. Given that he was a carpenter by training and worked in the construction business in Germany, he redid the structural foundations of the house: he grouted the entire house anew, stabilised the old stone walls with a concrete inner shell, built a new roof and, not least, a terrace.